So this is my second installment of this series of makeup looks to pair with red lips. In case you missed part 1 yesterday, you can click here. For this look, red hues translated from the lips with a rose gold shadow on the lids and a red-hued flush on the cheeks really compliment each other giving the entire face a very harmonious look. 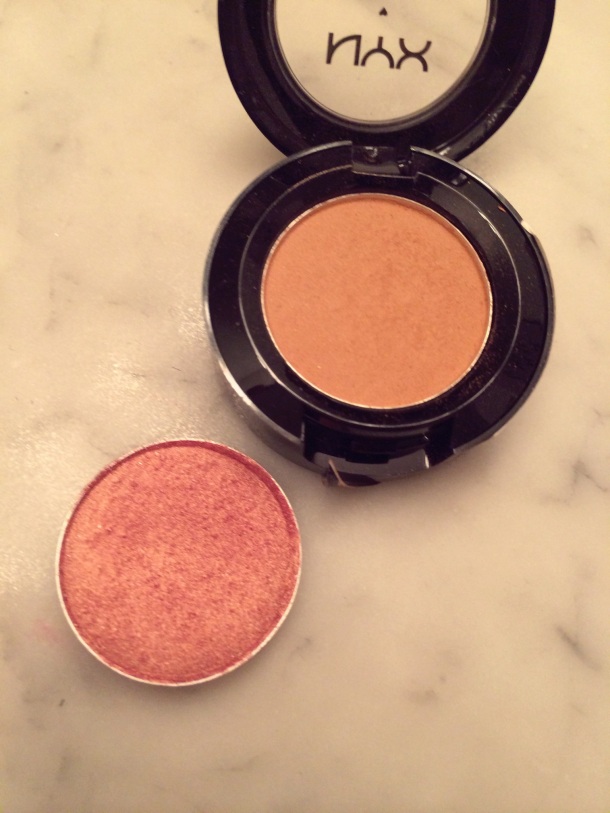 Expensive Pink (on the left), and NYX’s Blame it on Midnight to softly contour (on the right)

For this look, I started out with another long-wearing matte lip color, from OCC Cosmetics. Unlike yesterday’s Ruby Woo however, this wears very comfortably throughout the day without drying out. This is a beautiful true red that’s neither blue, nor orangey. Apparently the lip tars come with a brush for application, but maybe I misplaced mine. I used a lip brush (it’s actually the smudge brush from the magnetic snapping Sephora travel brush I wrote about here) to apply it in light layers until it was fully opaque.

For the eyes I wanted a soft rose gold look, not dramatic at all. So I put the rose gold all over, but with this metallic color on my lid, I needed a little something in the crease just to give the eye some definition. Since I didn’t want this to become smokey, I used NYX’s Blame it on Midnight which is described as a deep peachy beige. It doesn’t look like much in the pan, but it gave it just enough oomph. Finished it off with a little liner and the eyes were done!

The point of this look was to take hints of the red color from the lips and translate it onto the rest of the face. So, I finished it off with MAC’s Pinch Me blush. Sure, there are other super pretty red blush colors like Ambering Rose, but I didn’t want straight up red on my cheeks. MAC describes it as a medium dirty rose – to me it’s a pink that has alot of red undertone. Again, it gave just enough of that red color on my cheeks without going overboard.

Since I wanted the blush to stand out in this look, I used some extra products to perfect my skin, compared to just BB cream yesterday. On the rest of my face, I used:

What do you think of this look? Is it something you’d try? Stay tuned tomorrow when I share my last makeup look to pair with a red lip.

One thought on “Red Lips for the Holidays Look #2”